Here are some examples of Year 11 #Spanish students work on extending paragraphs using opinions in different tenses. This is very important to maximise marks in Speaking and Writing assessments. #schools #remotelearning #virtuallearning https://t.co/gOEEPyXX89

In 7V pupils are making full use of @msonenote in #Spanish it’s a wonderful digital exercise book (feedback is immediate),and recordings are excellent to work on #speaking tasks. #remotelearning #virtuallearning #schools https://t.co/hhBgfoPf8e

Thank you @natonlinesafety for another fantastic parent guide. 'What parents need to know about TikTok' #OnlineSafety #schools #TikTok https://t.co/DhjZ4xV8c7

Have you signed up yet for our 'Morning #Mindfulness ' Every Mon/Wed/Fri with Miss Gulvin on @MicrosoftTeams . Students/Staff/Parents are all welcome, those already joined are learning valuable skills. #MentalHealthMatters #Wellbeing #schools #MindfulMondays https://t.co/jd8dOZQET0

Did you know @SpanishDict has a range of brilliant Quizzes for the grammar points that we study in class? Here’s the one that Year 11 have been getting to grips with today https://t.co/OBo9BKc5tn as they revise Direct Object. #Languages #Spanish #schools #remotelearning https://t.co/yMDzHJfvfe

Our Year 8 students have been taking part in GCSE Taster lessons here is Art & Photography with 8S - Students got the chance to try out tactile #drawing .Students were asked to not look at their page and draw by feeling their face. #remotelearning #schools #photography #Creative https://t.co/rPtROPg8Mp

This week see's the first of our 'Women in Leadership' articles. Click the link below to read more about Amy - Assistant producer in TV. @the_female_lead #womeninleadership #schools #WomeninBusiness #freelancer #Empowerment https://t.co/pC2FT3tShc https://t.co/XDGreFMGii

Welcome back to all our students and staff this morning, we hope you had a #screenfree half term! https://t.co/lf3M8NXKAF

@co_marissa @mascalls @khskent Thank you for sharing. About to retweet.

Thank you to everyone who joined in with our Jan-u-Fit #CHALLENGE @heartofkenthosp . #Schools #charity #fundraising #FitnessMotivation https://t.co/l1bl1BRAUT

Our Year 9 #French students were asked to write a paragraph to say how long they have been doing a particular sport, give an interesting and complex opinion and mention a benefit of doing this #sport. Listen to these amazing audios! #schools #remotelearning https://t.co/UEb0GaOzst

For all students 11-18 #halfterm can be difficult for some. #MentalHealthAwareness #Wellbeing #support #MentalHealthMatters https://t.co/83y4qEAvsJ

For anyone with little ones at home looking for something to do in this weather ... look no further! @MaidstoneMuseum @MMF_maidstone have some daily great craft ideas. #Creative #creativityforkids #halfterm #fun #crafting https://t.co/BzxUw1ltbI

Calling all Y12 & 13 A Level English students, Miss Sayer is encouraging you to all get involved with this one. #English #Competition #schools https://t.co/rLkHsZOUXt

We got there #halfterm - #Students you have all been amazing demonstrating #resilience and #positivity with your approach to work and engaging in #ExtraCurricular activities. NO homework, it's a #screenfree halfterm Parents we couldn't do what we do without your support Thankyou https://t.co/GT2RRU4N3a

Looking for a creative challenge next week - why not enter our #photography Challenge. #schools #creativity #CHALLENGE https://t.co/EUFhfSG5uN

Encouraging your creativity next week #itvkidscreate is back this half term @ITV . We are excited to see what our students will create, please share your entries with us. #creativity #schools #GetInvolved https://t.co/GZKAo5qCvm

@davehammal Really pleased to see you managed to enjoy the screenfree time as a family making memories!

@JaySmit30309526 So glad to see her getting outside in the fresh air having fun!

Introducing an extract from Year 13 Film student Hannah’s short film – a dark and experimental exploration of astral projection. Please use the link below to view https://t.co/I6VoJ9F9YS via @YouTube #film #schools #remotelearning #virtuallearning #creative

We are looking forward to seeing 35 of our Year 5 #transition students on @MicrosoftTeams late this afternoon for a Classics #workshop - ‘Explore fascinating myths and legends from around the world and learn more about your favourite Mythological heroes.’ #schools #remotelearning https://t.co/Wa3uDNDPsw

Lots of great photos coming in, we are glad to hear you are all enjoying another snow afternoon #screenfree #wellbeing #MentalHealthMatters #schools #snow #hardworkpaysoff https://t.co/YSz6hKaq3i

Year 12 Film students have been learning about Meadows’ anti-Thatcher views in This is England. Deindustrialisation, North and South divide and a lot of political unrest! #schools #remotelearning #virtuallearning #film https://t.co/Nsk1WATTsJ

Our Bronze @DofE participants have been busy collaborating with one another to come up with their team names and logos! Take a look at some of their creative designs #DofE #thegreatoutdoors #schools #Creative #design @DofESouthEast https://t.co/6niwKBgA78

We've had an update on 'Willow' another of our sponsor @guidedogs . Watch the video below to see how she is getting on - well done Willow! #guidedogs #charity #sponsor #schools https://t.co/MHS5ceWsfV

We are glad to see so many of you enjoyed your free lesson yesterday, got outside and enjoyed the fresh air and snow! ❄️☃️ #MentalHealthAwareness #MentalHealthMatters #schools #Wellbeing #ScreenFree #Wellbeing https://t.co/xohATKTViC

Recently our Year 11 #gcse2021 PE had fun drawing the #heart, #circulatory system and any other details they could think of on an old t-shirt to help with their #revision. Fantastic to see different types of revision being used! #remotelearning #virtuallearning #schools https://t.co/EbdlvkEhrP

Last academic year, Young Chamber raised £5000 for SUDEP through events such as Burns Night Supper and Murder Mystery. This year they are on track to raise even more. Junior Young Chamber, which is run during POP sessions raised £500 for charity last academic year through the sale of milk shakes and reindeer bags. This year they have already organised and successfully run a barn dance for the over 60s in conjunction with Junior Interact and are set to break last year’s record. 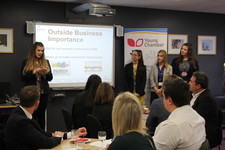 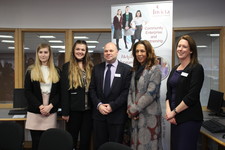 Annually we run a Business Lunch to which we invite some of the business community.  They are able to network with each other and our students as well as receiving a presentation from our Young Chamber group and partaking of a buffet lunch. Many links have been made which have led to new ventures with our business partners. This year was attended by Helen Grant MP and Helen Whately MP. 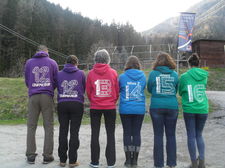 Young Chamber Hoodies is one of the Young Chamber sub businesses. YC Hoodies provides hoodies for students and trips within the school. All profits made by YC Hoodies and Young Chamber as a whole go to this year’s chosen charity SUDEP (SUDEP is the sudden, unexpected death of someone with epilepsy, who was otherwise healthy. In SUDEP cases, no other cause of death is found when an autopsy is done).  YC Hoodies have already supplied a couple of large scale trips within the school with hoodies and received a positive feedback. Last year we provided the Ski Trip, Snowdonia, Disney and Year 13 Leavers Hoodies. This year we will be providing the hoodies for Year 8 for their Norfolk trip and Year 11 Leavers amongst others. 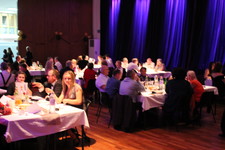 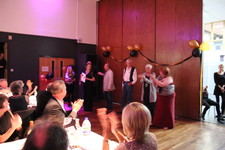 In cooperation with Interact we have organised a ‘Murder Mystery’ evening which was and was a great success.  People attended for a meal and became part of the mystery which was themed as a police constabulary ball. They played sleuths for the evening with prizes for the most intuitive tables. This event raised over £1200 for charity. 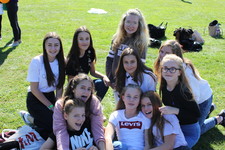 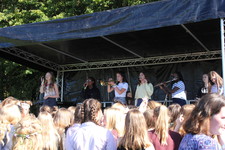 In September, Young Chamber challenged themselves to organise a new event, the IGS Fest. External bands such as the Arcaves played alongside our house bands to entertain students. There was also a glitter stall, food stalls and the Interact Fair trade tuck shop. This event, although was hard work to organise and took months of planning, was very successful raising over £1200 for SUDEP.

January will see the return of our annual Burns Night Supper hosted in conjunction with Interact and looks set to be as successful as previous years.

The enthusiasm for their club is second to none and as a group they are growing both in number and confidence. We are always looking for new ideas, so please contact Miss Pope if you have any suggestions.